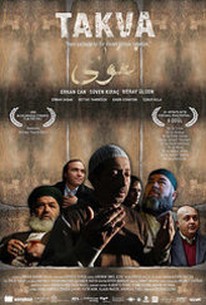 Takva: A Man's Fear of God

A man of faith is rewarded for his devotion, only to find his beliefs challenged by his new prosperity in this drama from Turkish filmmaker Özer Kiziltan. Muharrem (Erkan Can) is a man who lives a simple life devoted to God, determined to live by his laws and fully aware of the consequences of incurring his wrath. Muharrem lives in the small house where he was born, he works for the sackmaker who has employed him since he was a boy, he owns only one suit, and has few other worldly possessions. Muharrem's humble faith and desire to serve the Sheik (Meray Ülgen) who leads his house of worship results in his being offered a new job -- overseeing the properties owned by the Sheik's seminaries. Rauf (Güven Kiraç), the Sheik's assistant, tells Muharrem that his lack of greed and guile makes him perfect for the job, and suddenly he's given fine new clothes, an office, a cell phone, and even a car and driver. As Muharrem struggles to adjust to his new circumstances, he also finds his attitudes challenged -- while he once would have allowed a poor family to skip paying rent for a month on good faith, he is now informed that this could put the seminary's scholarship accounts into arrears, and he has to decide if performing needed repairs to the rental homes is worth the money they will cost. As Muharrem's moral and ethical compass is thrown out of adjustment, he also finds himself tormented by impure thoughts, which never troubled him in the past. Takva: A Man's Fear of God received its North American premiere at the 2006 Toronto Film Festival. ~ Mark Deming, Rovi

Erkan Can
as Muharrem

Critic Reviews for Takva: A Man's Fear of God

There are no critic reviews yet for Takva: A Man's Fear of God. Keep checking Rotten Tomatoes for updates!

Audience Reviews for Takva: A Man's Fear of God

There are no featured audience reviews for Takva: A Man's Fear of God at this time.