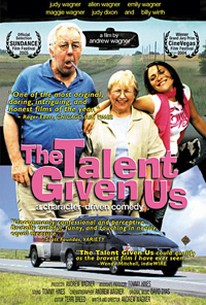 The Talent Given Us

The Talent Given Us is an odd hybrid of reality and fiction, but works due to its engaging characters.

The Talent Given Us Ratings & Reviews Explanation

The Talent Given Us Photos

Fact and fiction begin to blur in this comedy drama in which a filmmaker casts his parents, his siblings, and himself in a story loosely adapted from their own lives and personalities. Judy and Allen Wagner (played by Judy Wagner and Allen Wagner) are an elderly couple living in New York City who haven't seen their son, Andrew (Andrew Wagner), in some time. Deciding it's time they paid him a visit, Judy and Allen pack up their van and head out to Los Angeles, where Andrew is trying to make a name for himself as a director and screenwriter. Along the way, Judy and Allen decide to bring their daughters, Maggie (Maggie Wagner) and Emily (Emily Wagner), and the camera plays "fly on the wall" as Judy and Allen openly ponder the successes and failings of their children while they work on crossword puzzles, stop for meals, engage in small talk, and deal with the presence of fellow traveler Bumby (Judy Dixon). The first feature from Andrew Wagner, The Talent Given Us was awarded the Grand Jury Prize at the 2004 CineVegas Film Festival.

Critic Reviews for The Talent Given Us

Audience Reviews for The Talent Given Us

There are no featured audience reviews for The Talent Given Us at this time.

The Talent Given Us Quotes