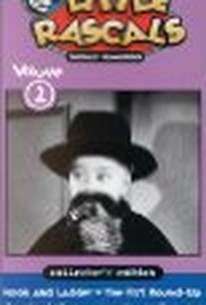 On the last day of school, the Our Gang kids learn that their beloved teacher Miss Jones (Arletta Duncan) is going to be married; thus, come September, the kids will have a "new" teacher, Mrs. Wilson. Miss Jones' fiancee Ralph (Edward Norris) playfully paints a frightening picture of Mrs. Wilson as "a dried-up mean old woman" ---neglecting to inform the kids that his last name is Wilson, and that Miss Jones will continue to be their teacher under her new married name. Thanks to Ralph's ill-timed joshing, the youngsters convince themselves that the only way to retain their favorite teacher is to break up the wedding --- starting with the pre-nuptual reception, where the kids surreptitiously "spike" the food with tabasco sauce, horseradish and garlic peppers. Originally released on April 27, 1935, "Teacher's Beau" marks the final "Our Gang" appearance of series stalwart Mathew "Stymie" Beard. Note: the version included in the "Little Rascals" TV package has been severely edited, rendering the film's punchline incomprehensible (a complete and uncut version is available on home video).

Donald Proffitt
as Our Gang Kid

Rex Downing
as Our Gang Kid

Barry Downing
as Our Gang Kid

Dorothy Dandridge
as Our Gang Kid

Marianne Edwards
as Our Gang Kid

Gene Reynolds
as Our Gang Kid

Tommy McFarland
as Our Gang Kid

Pete the Pup
as Himself

Billy Bletcher
as School Board Chairman

Ernie Alexander
as Guest
View All

There are no critic reviews yet for Teacher's Beau. Keep checking Rotten Tomatoes for updates!

There are no featured audience reviews for Teacher's Beau at this time.