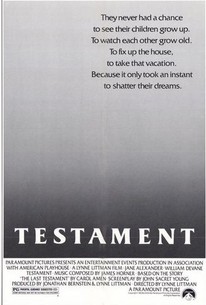 Director Lynne Littman has created an effective, understated portrayal of the cost of a nuclear war in human terms, in a film as far removed from the fake hyperbole of action and disaster movies as the natural world is from cartoons. Set in the small California town of Hamlin, the Wetherly family and their everyday concerns open the story. The trivia that fills their secure, ordinary existence disappears when a TV show is interrupted with the announcement that nuclear bombs have exploded in the major cities on the East Coast, and then the entire scene is erased in an increasingly white, blank movie screen -- meant to show that nuclear blasts have been detonated in California as well. Over 1000 people die in the first month from radiation sickness, but the mother in the Wetherly family (Jane Alexander) displays great inner strength as she cares for orphaned children the family has taken under its wing and goes on sustaining those that remain in her own family. At one point, she quietly conveys to her daughter the happiness of intimacy between two adults, knowing her daughter will not live to experience adult love. As these individuals and the children cope with day-to-day existence, there is never any intrusion of overt horrors, the focus remains on the individuals and the way in which they adjust to the inevitable.

Jesse Wayne
as Man in Line
View All