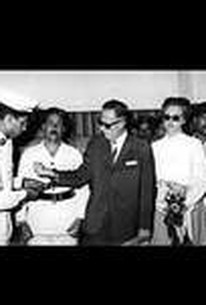 Oded Gur Arie was born in Israel, and as he was growing up in the 1960's his father would frequently go away on business trips for weeks on end, with little warning of when he would be coming or going. Oded was puzzled by this, but it wasn't until Ze'ev Gur Arie moved to Paris with his wife and son that he told young Oded what he did for a living -- he was an agent with MOSSAD, the Israeli intelligence agency, and under their tutelage he was leading a double life as Wolfgang Lotz, a wealthy horse breeder with a past in Nazi Germany. As Lotz, Ze'ev made friends with a number of former Nazi scientists who were being courted by the Egyptian government with an eye towards creating advanced weapons systems to use against Israel. Lotz was also a man who traveled in sophisticated circles and enjoyed the life of a playboy, quite a change from Ze'ev's staid existence as a husband and father. As a boy, Oded Gur Arie was forced to keep his father's double life a secret for the safety of his family, but years later he shares the strange story of his father's career with filmmaker Nadav Schirman in the documentary The Champagne Spy, in which Oded and a handful of former MOSSAD agents talk about Ze'ev Gur Arie, his years as Wolfgang Lotz (including a marriage to a German woman), and his troubled life after leaving MOSSAD, in which he and his family came to understand the toll his career had truly taken on them all. ~ Mark Deming, Rovi

There are no featured audience reviews for The Champagne Spy (Meragel Ha-Shampaniya) at this time.