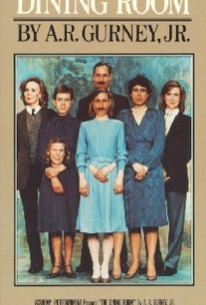 One room, several dinners, and a multitude of characters figure into the A.R. Gurney Jr. play The Dining Room. Several lives and relationships are built up and destroyed in consistently amusing fashion. The film consists of wall-to-wall vignettes, some lasting a mere few minutes. The charm and novelty of the original play rested in the fact that the huge "dramatis personae" was played by a mere six actors. This versatility is carried over to film version, though it sure seems like that dining room is full at all times.

Critic Reviews for The Dining Room

There are no critic reviews yet for The Dining Room. Keep checking Rotten Tomatoes for updates!

Audience Reviews for The Dining Room

There are no featured audience reviews for The Dining Room at this time.