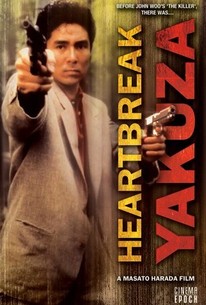 Shuji is a good-looking lad, one of the up-and-coming assassins for the Daito mob of the yakuza, Japan's answer to the mafia. Despite his pretense of toughness, he frequently has overwhelming longings to return to his childhood and the innocent games he played then with his best friend's younger sister. When he is sent to assassinate the members of a rival gang, childhood memories lead him to permit one of the men to live. Rather than being grateful, the survivor of the killings plots his revenge despite the fact that the two gangs are now merging into one operation. Meanwhile, Shuji has run across his childhood sweetheart, and the two of them realize that they share a similar view (common to many Japanese, apparently) that their childhood was a special, golden time to be cherished. She is not a member of the gangs, and through her inspiring presence, Shuji attempts to reform himself, though he must kill a lot of people in order to win that chance. ~ Clarke Fountain, Rovi

Critic Reviews for The Heartbreak Yakuza

There are no critic reviews yet for The Heartbreak Yakuza. Keep checking Rotten Tomatoes for updates!

Audience Reviews for The Heartbreak Yakuza

There are no featured audience reviews for The Heartbreak Yakuza at this time.