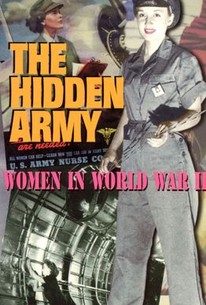 While men were off fighting World War II, 18 million women stayed home, learned technical skills, and worked hard to keep American industry functioning. These women made up a hidden army whose efforts doubtlessly helped the United States and its allies win the war. This video features three short films produced by the U.S. Army Signal Corps to bolster sagging morale and lagging factory production. The award-winning short films, including The Hidden Army, Women in Defense, and Army & Navy Nurse POW's, feature rare and vintage footage of women performing traditionally masculine tasks -- from electronics assembly to forklift operation -- and offers a glimpse into this important but underrated aspect of the American war effort.

There are no critic reviews yet for The Hidden Army: Women in World War II. Keep checking Rotten Tomatoes for updates!

There are no featured audience reviews for The Hidden Army: Women in World War II at this time.