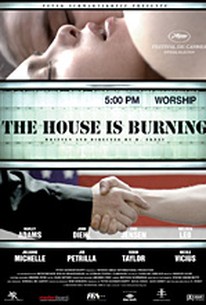 The House Is Burning

A group of suburban teens with little hope for the future find their frustrations finally coming to a point during one tragic night of intensely personal violence, shattering self-destruction, and illuminating self-discovery. Tomorrow morning Mike will join the army and head off to war, forever cementing his fate while blindly following in his father's footsteps. But Mike's girlfriend Valerie is embittered at the fact that her boyfriend is abandoning her, and before the night is over she will reject him and cheat in him in a selfish bid to express her anger. As a result, Mike becomes a volatile cauldron of suppressed rage and unhinged fear. His best friend Phil, a low-level drug dealer, has hatched a plan that will set him up for life, and his other friend Steve is attempting to procure a gun on order to take violent revenge on his abusive father. Now, as he sun sets and the darkness rolls in, a generation of disillusioned teens will confront a generation of disappointed parents in a battle that will force both to weigh their broken dreams against the sad remains of their current existence. ~ Jason Buchanan, Rovi

Critic Reviews for The House Is Burning

There are no critic reviews yet for The House Is Burning. Keep checking Rotten Tomatoes for updates!

Audience Reviews for The House Is Burning

There are no featured audience reviews for The House Is Burning at this time.

The House Is Burning Quotes