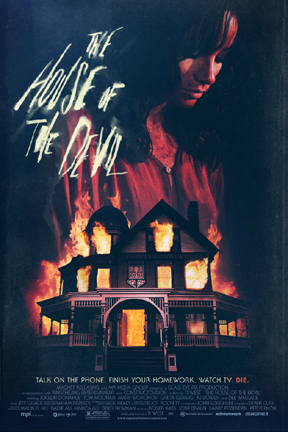 The House of the Devil

The House of the Devil Reviews

David Harris
Spectrum Culture
The grainy cinematography, slow pace and rhythm make The House of the Devil feel as if it came out with those old Wes Craven and Dario Argento cheapies. Unfortunately, homage isn't enough to add anything original to the proceedings.
Full Review | Original Score: 2/5

Eve Tushnet
Patheos
The atmosphere was fun and the suspense was great-all the scenes where the babysitter is just wandering the house were incredibly tense. And then it all just dissipates when the action starts, because this movie has nothing really to say...
Full Review

Cole Abaius
Film School Rejects
The problem with it, and with House of the Devil, is that it's mostly pedestrian stuff leading to a pay off that's just not enough.
Full Review | Original Score: C

Christopher Tookey
Daily Mail (UK)
Imagine a bad Ken Loach film invaded by monsters from a George A. Romero movie that's run out of cash, and you've already visualised a movie better than this one.
Full Review | Original Score: 2/5

Brett Michel
Boston Phoenix
Less is more, and writer/director/editor Ti West knows it -- until he forgets near the end of this babysitter-in-peril nailbiter.
Full Review | Original Score: 2.5/4

Peter Sobczynski
eFilmCritic.com
It may not completely succeed as a horror film, though I would take its deliberately funky and low-key vibe over the hard-sell nonsense of "Paranormal Activity" any day of the week.
Full Review | Original Score: 3/5

Kyle Smith
New York Post
Although the payoff is creepy, it takes a little too long to arrive -- and when it does, it's about as worn-out as the movie's title.
Full Review | Original Score: 2.5/4

David Germain
Associated Press
In the end, this homage to '80s horror is little more than a faithful flashback -- authentic in execution but about as scary as something you saw again and again way back when.

Kirk Honeycutt
Hollywood Reporter
A horror film with no punch.

Marshall Fine
Hollywood & Fine
That's the problem with this sort of homage: Unless you've got a startling new take, you wind up with a movie that's been done hundreds of times before, to much better effect.
Full Review

Harvey S. Karten
Compuserve
Director West gets credit for delaying the mayhem to the last 20 minutes, but fails to evoke a necessary tension until then.
Full Review | Original Score: C+

Ron Wilkinson
Monsters and Critics
Not a bad venture into the "girl meets devil" genre but a few rock songs short of a hit.
Full Review | Original Score: 6/10
Do you think we mischaracterized a critic's review?
Go back
More trailers