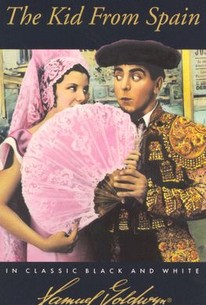 The Kid from Spain

The Kid from Spain Photos

In director Leo McCarey's film The Kid From Spain, actor Eddie Cantor plays mischievious college boy Eddie Williams, who, with his buddy Ricardo (Robert Young), is kicked out of college for sneaking into the women's dormitory. Ricardo (Young), on his way back to Mexico, suggests Eddie (Cantor) come along. First, however, Ricardo must stop at the local bank for some cash. Unfortunately, the bank is robbed as the two boys are leaving, and the fleeing thieves mistake Eddie for their getaway driver. In a panic, Eddie races off towards the Mexican border in hopes of getting way from them. Realizing that the bank robbers will go after him--Eddie, after all, is the only one who saw their faces--he convinces a skeptical border guard that he, too, is a Mexican. Once in Mexico, he's mistaken for a renowed bullfighter, and plays along with his newly assigned identity in order to avoid the American detective on his trail. Mayhem ensues, and Eddie eventually falls in love with Rosalie (Lyda Roberti), a young Mexican woman with an over-protective father. The musical numbers in The Kid From Spain were staged by a young Busby Berkeley and feature the Goldwyn Girls, whose ranks in this film include Betty Grable, Paulette Goddard, and Jane Wyman.

Walter Walker
as The Dean

American Matador
as Himself

Harry C. Bradley
as Man on Line at Border

Critic Reviews for The Kid from Spain

Audience Reviews for The Kid from Spain

There are no featured audience reviews for The Kid from Spain at this time.

The Kid from Spain Quotes