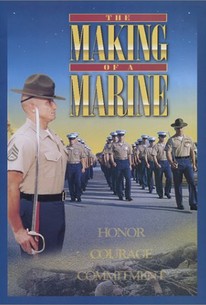 The Making of a Marine

The Making of a Marine Ratings & Reviews Explanation

Witness for yourself the rigorous training of Marine Corps Boot Camp. See why it's considered by many to be the toughest military training in the world. This unique 50 minute video takes you as close to the training as you can get without actually being there. From the recruiting process to the unveiling of the Corps' newest Marines on graduation day, you'll be amazed by the spirit and dedication of the young men and women who take up the challenge of recruit training. Shot on location at the recruit training depots at Parris Island, SC and San Diego, CA, this in-depth look at the making of a Marine has been acclaimed as an important work and a must see for anyone who thinks they have what it takes to become one of "The Few, The Proud." Molded in a furnace of shared hardship and tough training, you'll sense the pride, passion, and esprit de corps felt by those who earn the title...Marine. Also this DVD version includes the rare 1955 film titled The Challenge which shows young male recruits undergoing boot camp at San Diego, CA.

Critic Reviews for The Making of a Marine

There are no critic reviews yet for The Making of a Marine. Keep checking Rotten Tomatoes for updates!

Audience Reviews for The Making of a Marine

There are no featured audience reviews for The Making of a Marine at this time.

The Making of a Marine Quotes