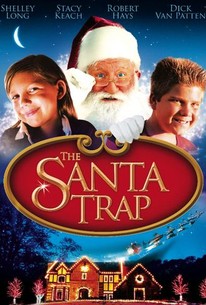 One of several "Santa Goes to Jail" TV movies appearing during the Christmas season of 2002, The Santa Trap actually has roots going as far back as the 1909 D. W. Griffith one-reeler A Trap for Santa Claus. Transplanted from Connecticut to California, the Emerson family isn't too happy over the prospect of sweltering their way through the Yuletide season. In fact, Bill and Molly Emerson (Robert Hays, Shelley Long) are so displeased with their current plight that they tell their children that Santa Claus doesn't exist. Hoping to prove them wrong, the couple's precocious daughter Judy (Sierra Abel) sets up a Rube Goldberg-like trap in her living room--and sure enough, the little darling snares Santa himself (played by Dick Van Patten) a few hours into Christmas Eve. Naturally, Judy's parents assume that the jolly old elf is a burglar, and promptly have Santa arrested. Thus is set in motion a frantic comedy of errors involving the Emersons, the inept local constabulary, and a burned-out biker named Max (Stacy Keach) who hopes to break out of the slammer by impersonating St. Nick. The Santa Trap first aired December 13, 2002, over the PAX network.

Critic Reviews for The Santa Trap

Audience Reviews for The Santa Trap

There are no featured audience reviews for The Santa Trap at this time.