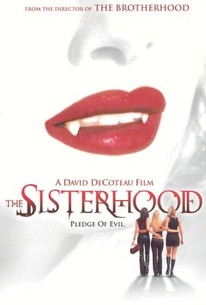 Two coeds discover a hot sorority house is hiding a sinister secret in this horror story. Christine (Jennifer Holland) and Reagan (Kate Plec) are a pair of young women who get to know each other when they end up sharing a dorm room in college. Christine is a studious type who is still getting over a family tragedy, while Reagan never lets her classes get in the way of a good time. Convinced Christine needs to get out more, Reagan persuades her to tag along as she attends a wild party at the Beta Alpha Tau sorority house. Both Christine and Reagan are impressed with the BAT house, and in particular, chapter president Devin (Michelle Borth), and they are soon invited to join. However, Ms. Masters (Barbara Crampton), who teaches a class on the paranormal, believes that the BAT house is the center of supernatural activity on campus, and urges Christine to inform her of the goings-on at the house. It isn't long before Christine finds out that Ms. Masters' fears were based in fact, but can she tear herself away from the decadent pleasures sorority life has brought to her? The Sisterhood was directed by David DeCoteau, who also made the similarly themed The Brotherhood.

Matt Fitzgerald
as Damon
View All

Critic Reviews for The Sisterhood

Audience Reviews for The Sisterhood

There are no featured audience reviews for The Sisterhood at this time.