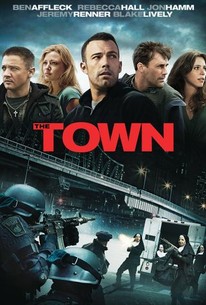 Tense, smartly written, and wonderfully cast, The Town proves that Ben Affleck has rediscovered his muse -- and that he's a director to be reckoned with.

Boston bank robber Doug MacRay (Ben Affleck) falls for a woman his gang had previously taken hostage after feigning a chance meeting with her to ensure that she can't identify them in Affleck's adaptation of author Chuck Hogan's novel Prince of Thieves. The son of a tough Charlestown, MA thief, Doug passed on his chance to walk the straight and narrow in favor of becoming a career bank robber. Not only is Doug's crew one of the most ruthless in Boston, but they're also one of the best; they never leave a trace of evidence, and always make a clean break. Over the years, Doug's fearless partners in crime have become something of a surrogate family to him; Jem (Jeremy Renner), the most dangerous of the bunch, is the closest thing Doug has ever had to a brother. But a divide begins to open between the two career criminals when Jem takes bank manager Claire Keesey (Rebecca Hall) hostage during a particularly tense heist, and the group subsequently discovers that she hails from their own tight-knit suburb. When Jem proposes that the gang make an effort to find out just how much Claire recalls about the crime, Doug fears that his volatile partner may do more harm than good and volunteers himself for the job. Later, Doug turns on the charm while pretending to bump into Claire by chance, and becomes convinced that she doesn't suspect him of being the same man who just robbed her bank. As the feds turn up the heat on the gang, Doug finds himself falling for Claire, and searching desperately for a means of cutting his ties to his criminal past. But with each passing day, Jem grows increasingly suspicious of Doug's true motivations. Now caught between two worlds with no chance of turning back, Doug realizes that his only hope for finding a happy future is to betray the only family he's ever known. ~ Jason Buchanan, Rovi

Jimmy Joe Maher
as Inside Man at Fenway

James McKittrick
as Cop Who Looks Away

News & Interviews for The Town

Critic Reviews for The Town

Audience Reviews for The Town