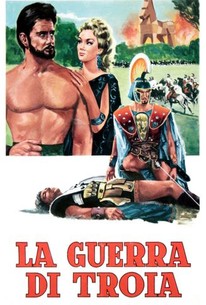 Steve Reeves gives the most dramatically demanding performance of his career (and a surprisingly good one) in The Trojan Horse. Essentially a retelling of the final year of the siege of Troy from the point of view of Aeneas (Reeves), the movie is filled with fascinating portrayals. Aeneas, taking the interpretation from the poet Virgil, is the wisest of the Trojans and, after ten years of war, has become the leading advocate for finding an end to the fighting. His wisdom and nobility have earned him a place at the table with King Priam and the other rulers, which puts him at odds with the vain, jealous Paris and his Helen. Opening with the slaying of Hector by Achilles, the film is steeped in complex personal relationships and mythological conceits. John Drew Barrymore is the other "name" actor here, playing Ulysses as a clever, cynical, and bold warrior among the Greeks. Reeves brings real nobility to Aeneas and relies on his acting skills as much as his physique to bring off this movie, often mixing the two in a script filled with ironies, as when Aeneas must kill a Greek warrior for whom he earlier expressed respect. Along with Reeves' two Hercules films from the end of the 1950s, and Vittorio Cottafavi's Hercules and the Captive Women, this is one of the best examples of Italy's sword-and-sandal genre.

Carlo Tamberlani
as Priam
View All

Critic Reviews for The Trojan Horse

There are no critic reviews yet for The Trojan Horse. Keep checking Rotten Tomatoes for updates!

Audience Reviews for The Trojan Horse

There are no featured audience reviews for The Trojan Horse at this time.