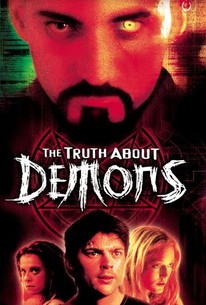 The Truth About Demons

Recalling the absurdist bloodletting of fellow kiwi Peter Jackson, Glenn Standring's debut feature is a clever, gleefully ludicrous flick about demons, disembowelments, and bloody death. Auckland anthropologist Dr. Harry Ballard (Karl Urban), a noted foe of fringe religious cults, receives a video death threat from demon-worshipper and Anton LeVey clone Le Valliant (Jonathon Hendry). Ballard laughs off the missive but as he is trying to get into his car, he is abducted by a band of Satanist punks, shot full of heroin, and beaten within an inch of his life. Somehow he escapes from his prison, but when he relates his experiences to the police, they are more inclined to believe that Ballard's story is based on drug-induced hallucinations than fact. Later he discovers his girlfriend strung up with barbed wire and an incriminating message written in her blood. Panicked, Ballard flees into the streets where his sanity and his faith in rationality slowly starts to come apart. While being pursued by a slick-skinned demon, Ballard is saved by Benny (Katie Wolfe), a borderline schizophrenic angel of mercy who knows a thing or two about the dark side. As they try to save themselves in the city's maze of darkened back alleys, Ballard struggles to understand this new irrational world that yawns before him. This film was screened with the Midnight Madness program at the 2000 Toronto Film Festival. ~ Jonathan Crow, Rovi

Adam Brookfield
as Off. Jones

Robert Tripe
as Melissa
View All

Critic Reviews for The Truth About Demons

Audience Reviews for The Truth About Demons

There are no featured audience reviews for The Truth About Demons at this time.

The Truth About Demons Quotes