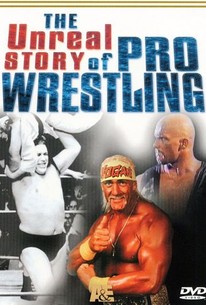 The Unreal Story of Professional Wrestling

Professional wrestling has a long and interesting history that would surprise most naysayers and enchant those who are already fond of the sport. With this in mind, whether or not you think the sport is authentic or a fraud shouldn't keep you from enjoying the spectacle. And what a spectacle it is. In the latter part of the 19th century, professional wrestling was to the common man what championship heavyweight boxing is today. The sport eventually evolved into a carnival act that slid right into the early years of television, where the great soap opera began to take shape. Whether Killer Kowalski really pummeled his opponents because he was a truly devious beast or it was written in a script seems to be irrelevant to the producers of The Unreal Story of Wrestling. As narrator Steve Allen at one point professes, "Sure wrestling is fake. We wouldn't have it any other way" -- it seems that reality is not the point of professional wrestling. People are amazed by 250 pound men leaping off the top turnbuckle, but they are more captivated by the characters and the trash talk before, during, and after the matches. They are thrilled by folded chairs being bashed into the dreaded villain's skull and cry in disgust when the same villain distracts the referee as his manager throws some form of blinding powder into the hero's eyes. The great clashes have been taking place for generations and have entertained all those that have lived through wrestling's stranglehold on our fascination. This documentary is entertaining and informative, as can be expected from the competent crew at A&E. Some may laugh when kids go crazy for Hulk Hogan, but they can't be snide -- because many have, at one time or another, felt the fever as Gorgeous George swaggered his way into the ring. Professional wrestling, whether we like it or not, is as entrenched in Americana as any other sport.

Critic Reviews for The Unreal Story of Professional Wrestling

There are no critic reviews yet for The Unreal Story of Professional Wrestling. Keep checking Rotten Tomatoes for updates!

Audience Reviews for The Unreal Story of Professional Wrestling

There are no featured audience reviews for The Unreal Story of Professional Wrestling at this time.