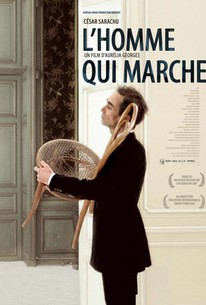 French director Aurélia Georges's offbeat character study The Walking Man commences with the intersection of two minds and two lives: that of a photographer, and a gaunt fellow with a perpetually darkened mood named Viktor Atemian. The men meet in mid-1970s Paris, forge an enduring friendship and play Dadaist games together; in time, Viktor impulsively picks up a pen and paper and begins to write continually, irrepressibly. Viktor's success first peaks, thanks in no small part to the acclaim of his premier short story, but in time, his popularity and his money both run out - he's forced to sell his luxury Parisian apartment and eventually winds up on the street. Georges's film follows Atamian as he slides from the crests of fame to the depths of obscurity, and into the emotional and spiritual no man's land that accompanies such a state. ~ Nathan Southern, Rovi

There are no critic reviews yet for The Walking Man (L'Homme Qui Marche). Keep checking Rotten Tomatoes for updates!

There are no featured audience reviews for The Walking Man (L'Homme Qui Marche) at this time.