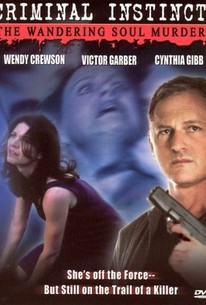 The Canadian TV movie The Wandering Soul Murder was based on the novel by Gail Bowen. Though the book took place in Saskatchewan, the film's action occurs in Toronto, where a shadowy serial killer is systematically murdering prostitutes. University professor, single mother, ex-cop, and erstwhile private detective Joanne Kilbourn (Wendy Crewson) is drawn into the case when one of the hookers is killed just outside the shop owned by Joanne's daughter. Things become even more personal when the fiancée of Joanne's son kills herself, apparently ashamed of her own past. For TV purposes, the seamier elements of the novel were cleaned up, though the film was still fairly explicit. Originally presented January 2, 2001 as part of the off-and-on CTV network series Criminal Instincts (aka The Joanne Kilbourn Mysteries), The Wandering Soul Murder was seen in the United States courtesy of the Lifetime cable channel on January 7, 2002.

Pamela Wallin
as Herself

There are no critic reviews yet for The Wandering Soul Murders. Keep checking Rotten Tomatoes for updates!

There are no featured audience reviews for The Wandering Soul Murders at this time.