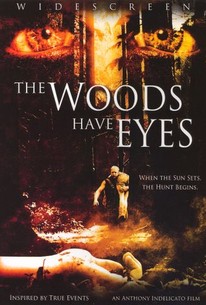 The Woods Have Eyes

The Woods Have Eyes Photos

When an older camper takes his naïve young counterparts on a forbidden excursion into the forest, the group quickly discovers that a lingering urban legend has terrifying roots in reality. It's a serine summer day in Upstate New York, and many families have chosen to soak in the sun with a weekend camping excursion. Wisecracking camper Joe knows well the local legend concerning a murderous backwoods hunter named Cappy, and he's determined to have a laugh at the expense of his naïve young counterparts. One day, after Carmine leads his group across the river that marks the camp's boundaries, Joe attempts to convince his fellow campers that Cappy is more than an amusing campfire tale, and that his cabin is actually fairly close by. When the wandering group runs across a cabin in a remote clearing, Joe peers through the window and sees a dead girl sprawled out on the floor. Cappy's son Clem is weeping over her lifeless body. When Clem hears something moving outside, the chase begins.

Critic Reviews for The Woods Have Eyes

There are no critic reviews yet for The Woods Have Eyes. Keep checking Rotten Tomatoes for updates!

Audience Reviews for The Woods Have Eyes

The Woods Have Eyes Quotes