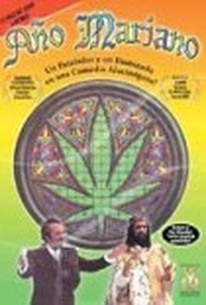 The Year of Maria

Religion has been called the opiate of the people, but one hapless soul finds his spiritual life turned upside down by too much marijuana in this comedy. Mariano (Karra Elejalde) is a traveling salesman who falls asleep while driving late at night, sending his car off the road and into a field -- which turns out to be part of an illicit marijuana farm. When Mariano awakes, he discovers that a team of policemen led by Sgt. Talavera (Manuel Manquina) has found the weed and set the field ablaze. The billows of fragrant smoke have a powerful effect on Mariano, and he imagines he's seeing an apparition of the Virgin Mary. Word of Mariano's "holy vision" travels to evangelist Sister Trini (Gloria Munoz) in a nearby town, and he soon attracts a number of her followers who want to hear about how the Virgin spoke to him (leaving out the drugs, of course). Con man and self-styled spiritual seeker Tony Towers (Fernando Guillen Cuervo) sees a potential gold mine in Mariano, and soon involves him in a scheme to build a "holy shrine" that will help him separate naive country folk from their cash. Karra Elejalde and Fernando Guillen Cuervo wrote and directed Ano Mariano as well as playing the leading roles; the film was a major box-office success in their native Spain. ~ Mark Deming, Rovi

Critic Reviews for The Year of Maria

There are no critic reviews yet for The Year of Maria. Keep checking Rotten Tomatoes for updates!

Audience Reviews for The Year of Maria

There are no featured audience reviews for The Year of Maria at this time.

The Year of Maria Quotes