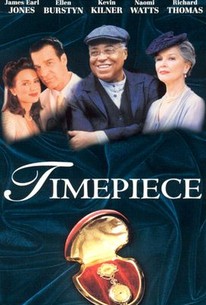 This made-for-TV drama is a prequel to the 1995 feature The Christmas Box, which starred Maureen O'Hara as the formidable dowager Mary Parkin. Set in the '40s, Timepiece stars Naomi Watts as the much-younger Mary, a British transplant not yet married to her widowed boss, small-town businessman David Parkin (Kevin Kilner). By way of explaining how the older Mary came into possession of the priceless watch which figured so prominently in Christmas Box, Timepiece unfolds the story of Lawrence Flynn (James Earl Jones), an old black clock-maker who is accused of murdering the bullying white bigot who'd been tormenting him. As the town's legal authorities are poised to throw the book at Flynn, David Parkin steps forward to make a statement that will win him the undying love and fidelity of the impressionable Mary. Weaving in and out of the proceedings is a poignant subplot involving Parkins' daughter, Andrea (Mercedes Villamil), a victim of meningitis. Adapted from a novel by Richard Paul Evans, Timepiece made its first CBS network appearance on December 22, 1996.

There are no critic reviews yet for Timepiece. Keep checking Rotten Tomatoes for updates!

There are no featured audience reviews for Timepiece at this time.