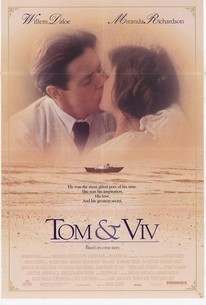 This romantic drama chronicles the tumultuous love affair between American poet T.S. Eliot and socialite Vivian Haigh-Wood. It is based on the 1984 play by Michael Hastings. Eliot met Vivian in 1914 while he was still a student at Merton College, Oxford. She had come with her brother Maurice to visit Eliot. It is apparent from the start that Viv is a little odd. But despite her idiosyncrasies, Eliot falls in love and marries her. They honeymoon in the southern resort of Eastbourne. Vivian has extreme mood swings. She takes a huge amount of esoteric medicines, but they do not help her. Out of control, she destroys her room. After the honeymoon, they stay in London with Bertrand Russell, a friend of Eliot's. Viv continues to get sicker after she is again misdiagnosed and improperly medicated. Time passes and Eliot becomes an established poet. He works for a publishing company. His wife has gone completely bonkers and he must commit her to an asylum. He doesn't visit her for a decade. When he finally does he is surprised to find that Viv still speaks well of him. Her condition was diagnosed as a hormonal imbalance related to menstruation.

Joseph O'Conor
as Bishop of Oxford

Simon Robson
as Man No. 2