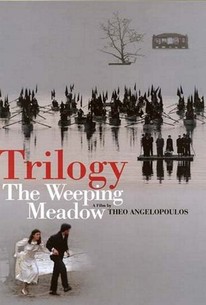 Master Greek filmmaker Theo Angelopoulos wrote and directed this downbeat look at his nation's often blighted history, as seen through the eyes of an unfortunate young couple. In 1919, a band of Greek refugees who had found a home in Odessa are forced to return to their homeland following the Russian Revolution, and they settle in Thessaloniki, a forbidding riverside village where few wish to dwell. Eleni is a youngster who arrives in Thessaloniki and is taken in by Spyros (Vassilis Kolovos), one of the village leaders. While Eleni is raised as a member of the family alongside Alexis, Spyros' son, the two find themselves attracted to one another as they grow older, and they pledge to someday marry. By the age of 16, Eleni (Alexandra Aidini) becomes pregnant by Alexis (Nikos Poursadinis), and she gives birth to twins, which Spyros puts up for adoption. However, after the death of his wife, Spyros declares that he will make the now-grown Eleni his new spouse. Eleni and Alexis see no choice but to run away together, and they join up with a band of traveling musicians led by Nikos (Giorgos Armenis). But an angry Spyros declares that he will find the runaways, while Eleni and Alexis attempt to stay one step ahead of him while searching for their lost children. Theo Angelopoulos announced that The Weeping Meadow will be the first film in a trilogy which will represent his final works.

Michalis Yannatos
as Zissis, The Clarinetist

Giorgos Armenis
as Nikos, The Fiddler

Toula Stathopoulou
as Woman In Coffee House
View All

There are no featured audience reviews for Trilogia: To livadi pou dakryzei (The Weeping Meadow) at this time.