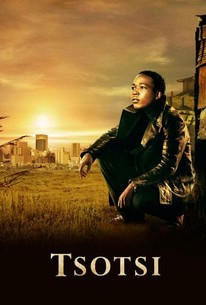 An amoral teenager develops an unexpected paternal side in this powerful drama from South Africa. Tsotsi (Presley Chweneyagae) is the street name used by a young Johannesburg delinquent who has taken to a life of crime in order to support himself. Tsotsi comes from a blighted upbringing -- his mother died slowly from AIDS-related illnesses, and his father was torturously abusive -- and he has developed a talent for violence borne of necessity as well as taking strange pleasure in hurting other people. One evening, Tsotsi shoots a woman while stealing her car, and only later discovers that her infant son is in the back seat. Uncertain of what to do with the baby, Tsotsi takes the boy home and tries to care for it -- going so far as to force Miriam (Terry Pheto), a single mother living nearby, to nurse the baby. With time, Tsotsi learns the basics of child care, and the presence of the baby awakens a sense of humanity in him that life on the street had stripped away. Tsotsi was adapted from a novel by the award-winning South African writer Athol Fugard.

More Wolverine News Than You Can Shake a Claw At!
Wolverine Has a Director!
The Weekly Ketchup: "Casino Royale" Goodies, "The Dark Knight" Heads East, No Governator In "Terminator 4," And More!
View All