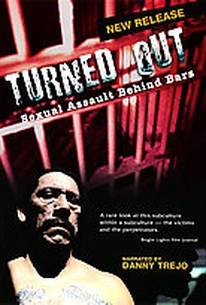 Turned Out: Sexual Assault Behind Bars

Documentary filmmaker Jonathan Schwartz broaches the taboo subject of homosexuality behind bars with this frank and unflinching look at the sexual hierarchy in prison narrated by Danny Trejo. In 2003, there were more than two million Americans serving time in the nation's prisons. Over the course of their time served, one in five of those inmates will be "turned out," sodomized by their fellow prisoners and forced into sexual slavery. The vast majority of those victims will be non-violent drug offenders, a prison population that has nearly doubled since 1993. In addition to discussing the relationships between the "boys" and "sissies" designated as the females in the relationships to the "men" who often form "families" by developing relationships with several "boys" at once, inmates at correctional facilities all across the country reveal the secrets of their underground economy, and the sociology of power and lust as it relates to prisoners in need of companionship or protection. Additional conversations concerning the sexual exploitation of inmates by prison guards and the culture of silence that allows it to go on unchecked offers fascinating insight into a world that more and more Americans experience as prison populations continue to skyrocket.

Critic Reviews for Turned Out: Sexual Assault Behind Bars

There are no critic reviews yet for Turned Out: Sexual Assault Behind Bars. Keep checking Rotten Tomatoes for updates!

Audience Reviews for Turned Out: Sexual Assault Behind Bars

There are no featured audience reviews for Turned Out: Sexual Assault Behind Bars at this time.