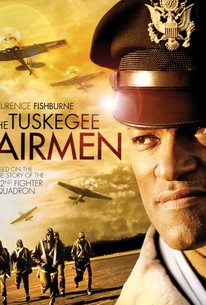 Based on a true story, The Tuskegee Airmen chronicles the experiences of the first African-American fighter pilots in the U.S. Army Air Corps. Using Hannibal Lee (Laurence Fishburne) as a focal point, the movie follows the airmen from their initial training at Tuskegee, Alabama, through their combat assignments during World War II. Featuring fascinating vintage military planes and exciting air-combat footage, the film also depicts the racism encountered by the pilots. In one example, the airmen are forced to give their seats on a crowded train to German prisoners of war. Even after the airmen complete their training, the military brass is reluctant to trust them in battle. But First Lady Eleanor Roosevelt publicizes their plight by going to Tuskegee and having one of the African-American pilots take her for a plane ride, and shortly thereafter the airmen are assigned a combat role. Eventually they join with other African-American pilots in the 332nd Fighter Group where their skill in protecting bombers from enemy fighters finally earns them the respect they deserve. The screen story was co-authored by Robert Williams, one of the pilots trained at Tuskegee.

Courtney B. Vance
as Lt. Glenn

Vivica A. Fox
as Charlene

David Harrod
as White Pilot No. 1

Johnny Judkins
as White Pilot No. 2

Critic Reviews for The Tuskegee Airmen

Audience Reviews for The Tuskegee Airmen