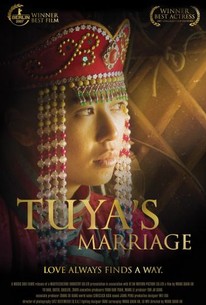 The breathtaking landscapes of Inner Mongolia are a powerful backdrop for this quietly intense, dryly comical film.

A reserved Mongolian bride diagnosed with a debilitating back injury enters into an unusual agreement with her disabled husband in Lunar Eclipse director Wang Quan'an's Golden Berlin Bear-winning entry into the 2006 Berlin International Film Festival. Peasant Tuya (Yu Nan) is a happily married mother of two whose husband Bater is permanently disabled. One day, after hard-working Tuya collapses in the fields while straining to perform her rigorous duties, the local doctor diagnoses her with a lumbar dislocation. Subsequently unable to care for her invalid husband, Tuya and Bater agree to divorce so that the ailing woman can wed a husband capable of caring for both of them. Though several suitors throw their hat into the ring upon hearing that Tuya is available, each is immediately put off upon learning that Bater is part of the deal as well. The only man who seems willing to consider caring for both is divorced oil tycoon Baolier, who, as a smitten young schoolboy, was once good friends with the kindly Tuya. When a sudden tragedy strikes, threatening Bater's life, however, Baolier's true intentions open the door for Tuya's cuckolded neighbor Sen'ge to step in and save the day. At first simply thankful for the benevolent intervention of the shy but likable Sen'ge, Tuya slowly begins to realize just how deep the lovelorn Sen'ge's feelings for her truly run.