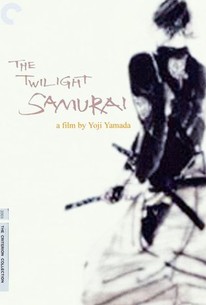 Samurai epic as a touching drama.

Veteran filmmaker Yoji Yamada -- who is perhaps most famous for cranking out most of the 48 films of the Tora-san series -- directs this good-natured drama set in the waning years of the Edo period (1600-1867). Seibei (Hiroyuki Sanada) is a low-level samurai struggling to get by on stipend of 50 rice bales a year while working as a clerk at the clan office. While his co-workers spend their evenings sucking down sake at the local pub, Seibei, whose wife has passed away, heads straight home to care for his two young daughters and doddering mother. One day, his friend Michinojo (Mitsuru Fukikoshi) tells him that his boyhood friend Tomoe (Rie Miyazawa), is leaving her thuggish husband and returning home. Tomoe soon starts to frequent Seibei's house, taking care of his daughters, while Seibei quietly falls in love with the attractive young lass. After defeating Tomoe's husband in a duel, armed with only a pointed stick, Seibei is asked by Michinojo if he wants to marry Tomoe. Seibei declines, too embarrassed by his poverty to accept. Later, as he prepares to perform the distasteful task of killing a fellow samurai, he learns that Tomoe is engaged to another man. ~ Jonathan Crow, Rovi