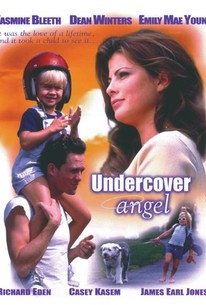 A little girl plays matchmaker for two lonely adults in this romantic comedy. Harrison (Dean Winters) is a struggling freelance writer who's been working on a series of detective novels, but can't find anyone who wants to publish them. One day, Melissa (Lorraine Ansell), one of Harrison's former girlfriends whom he hasn't seen in some time, appears at his doorstep with something of a surprise -- she's going out of town for several weeks, and needs someone to look after her six-year-old daughter, Jenny (Emily Mae Young). Before Harrison has much of a chance to object, Melissa is gone, and he's stuck baby-sitting Jenny, an idea he's less than enthusiastic about. However, before long, Harrison develops a soft spot for the tyke, and precocious Jenny decides what single Harrison needs is a steady girlfriend; Jenny focuses her energies on prodding Harrison into a relationship with Holly (Yasmine Bleeth), a beautiful woman who frequents the same coffee shop. Undercover Angel also features James Earl Jones and Casey Kasem.

James Earl Jones
as The Judge

Casey Kasem
as Himself

Carmen
as Stenographer
View All

There are no critic reviews yet for Undercover Angel. Keep checking Rotten Tomatoes for updates!

There are no featured audience reviews for Undercover Angel at this time.