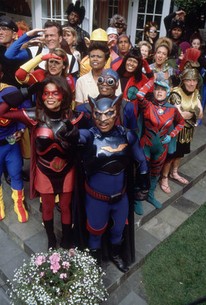 Up, Up, and Away! Ratings & Reviews Explanation

Up, Up, and Away! Photos

Like most teenagers, 14-year-old Scott Marshall (Michael J. Pagan) feels like a misfit "freak" within his own family. In this instance, however, circumstances are a bit different. Practically every member of the Marshall family possesses super-powers and leads a double life as a costumed hero. His dad, Jim (Robert Townsend, who also directed this film), is an orthodontist by day and the crime-busting Bronze Eagle by night. Even Grandpa Marshall (Sherman Hemsley), now in retirement, can recall the good old days when he battled the forces of evil as the Steel Condor. Alas, poor Scott possesses none of his parents' or his siblings' special powers -- in fact, he's so clumsy that he is in danger of being washed out of his school's soccer team. But Scott eventually proves that there's more to heroics than mere muscle power when he's called upon to rescue his family from a gang of techno-villains. Up, Up and Away made its Disney Channel cable TV bow on January 22, 2000.

Kit Mallet
as Thug #3
View All

Critic Reviews for Up, Up, and Away!

Audience Reviews for Up, Up, and Away!

There are no featured audience reviews for Up, Up, and Away! at this time.

Up, Up, and Away! Quotes