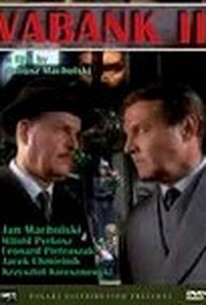 This is a sequel to the domestically popular Va Banque about the antagonism between Kramer (Leonard Peetraszak) a double-crossing, unscrupulous ex-thief, now in jail, and his former partner Kwintz (Jan Machulski, popular actor and father of director Juliusz Machulski). The setting is the 1930s. Kramer has been in prison thanks to Kwintz, and now with the help of an accomplice he escapes and seeks revenge against his nemesis. Kwintz gears up to defend himself by summoning his talented, crafty friends for help, and Kramer backs up the hitman he hires to kill Kwintz with a plan to send him to prison, just in case. Circumstances move rapidly along, and soon the escaped jailbird Kramer is about to take off for Switzerland with some stolen loot, bribing the Nazi border guards to look the other way as he leaves. At that point, everything goes unexpectedly haywire in a big way. This film should not be confused with the 1986 Va Banque by director Diethard Kosher. ~ Eleanor Mannikka, Rovi

There are no critic reviews yet for Vabank II. Keep checking Rotten Tomatoes for updates!

There are no featured audience reviews for Vabank II at this time.