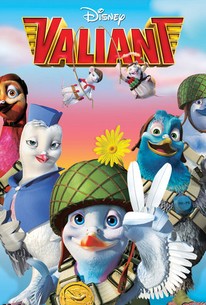 Valiant has a good collection of voice talents, but the story is strictly by-the-numbers.

Inspired by the true-life story of carrier pigeons who were trained to carry vital information for the Allied forces across the English Channel during World War II, this computer-animated adventure comedy focuses on Valiant (voice of Ewan McGregor), a wood pigeon who has volunteered to do his part for England during the war. While Valiant believes in the cause, he's not exactly a quick study in his training under a no-nonsense sergeant (voice of Jim Broadbent), and his new pal Bugsy (voice of Ricky Gervais), a vermin-carrying former denizen of Trafalgar Square, fares even worse in the courage department. However, when one of the key British birds, Mercury (voice of John Cleese), is captured by notorious Nazi falcon Von Talon (voice of Tim Curry), Valiant and his crew must spring into action to keep the lines of communication open in time for D-day. Along the way, Valiant also finds time to romance avian nurse Victoria (voice of Olivia Williams) and French resistance agent Charles De Girl (voice of Sharon Horgan). Produced at the British Ealing Studios, Valiant also features the voice talents of John Hurt, Rik Mayall, and Hugh Laurie. ~ Mark Deming, Rovi

Box Office Preview: "Snakes" Prepares For Takeoff
Critical Consensus: Boring To Be "Wild," And There Is Indeed Another "Scary Movie"
Ten Animated Movies to Compete for Oscar Consideration
View All