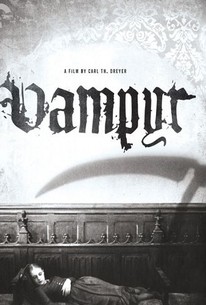 Full of disorienting visual effects, Carl Theodor Dreyer's Vampyr is as theoretically unsettling as it is conceptually disturbing.

Vampyr ranks in many circles as one of the greatest horror films of all time. Inspired by Sheridan Le Fanu's Carmilla, the story concerns a mysterious series of killings, committed by a crone of a female vampire (Henriette Gerard). The story is told through the eyes of a holiday reveller (Julian West), who at first scoffs at the notion of a supernatural murderer, but who is eventually forced to believe that there are more things in heaven and earth. Dreyer offers few explanations of the phenomena he presents on screen: the strange and frightening happenings just happen, as casually as any everyday occurrence. As was his custom, Dreyer mostly uses nonprofessionals in his cast. Vampyr is available in a wide variety of severely edited and duped versions. ~ Hal Erickson, Rovi

Henriette Gerard
as The Woman from the Cemetery

Maurice Schutz
as Lord of the Manor

N. Babanini
as The Girl

Jane Mora
as The Religious Woman
View All

New On DVD This Week: Pirates of the Caribbean, A Ghost Story, and More
View All