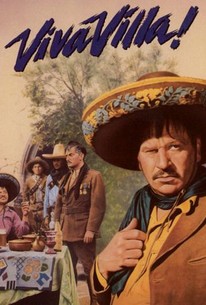 A far from factual filmed biography of Mexican patriot Pancho Villa, Viva Villa! was written by lengendary screenwriter Ben Hecht. We first meet the young Villa when his father is beaten to death after protesting Diaz' seizure of the Mexican peons' land. Pancho exacts a temporary revenge by knifing one of his father's killers, then heads for the hills, where he organizes a band of renegades. As he "matures," Pancho is played by child actor Phillip Cooper and adult star Wallace Beery. Though ruthless in his treatment of the rich, Pancho is a hero to the poor, who receive the spoils of Villa's raids. Befriended by American reporter Johnny Sykes (Stuart Erwin), Villa becomes internationally famous thanks to Sykes' articles concerning his exploits. Pancho also finds a strong ally in Don Felipe de Castillo (Donald Cook), who introduces the rebel bandit to Madero (Henry B. Walthall), the leader of the peon revolt. Madero convinces Villa to join forces with him, the better to oust the Diaz regime. His principal rival in this goal is ambitious General Pascal (Joseph Schildkraut), who intends to set up an even more despotic regime once Diaz is eliminated. Emerging victorious in his fight against the federales, Villa is encouraged to go back home by Madero. Illiterate and dangerously naïve, Villa quickly runs into trouble with the new government, giving Pascal a chance to humiliate his former "comrade in arms." Later, Pascal shows his true colors by assassinating Madero and assuming control of Mexico. Thirsting for revenge, Villa and his men go on a bloody rampage, culminiating in the ritualistic murder of the treacherous Pascal (he is staked out on an anthill and covered with honey). Made president of Mexico upon the elimination of Pacal, Villa once more finds himself in over his head. Unable to deal with political infighting, Villa retires to his ranch. One day, after running into his old friend Johnny Sykes (Stu Erwin), Villa is shot and mortally wounded by his onetime friend Don Felipe, who holds Pancho responsible for the death of his sister Teresa (Fay Wray). As he dies, Villa begs Johnny to tell him what his epitaph will be. Improvising quickly, Johnny tells of Villa's love for Mexico and his many accomplishments. Partially filmed on location in Mexico, Viva Villa was plagued with a multitude of production problems, not least of which was the diplomatic gaffe committed by Lee Tracy, the film's original Johnny Sykes: While standing on a balcony watching a military parade, an inebrieated Tracy relieved himself on the troops below and was immediately fired. Another crisis arose when the Mexican government objected to star Wallace Beery, on the grounds that Beery usually played villains or buffoons. Despite these and other setbacks, Viva Villa was finally completed under the assured directorial hand of MGM troubleshooter Jack Conway and the expert supervision of David O. Selznick. Though some critics objected to the film's violence, Viva Villa was a financial success.

Henry B. Walthall
as Madero

Phillip Cooper
as Villa as a Boy

Herbert Prior
as General

H.B. Warner
as Bit
View All