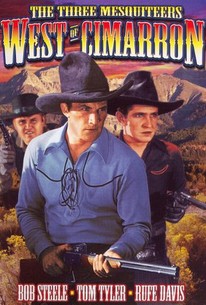 A fine, action-packed entry in Republic Pictures' long-running "Three Mesqueteers" Western series, West of Cimarron featured the constellation of Bob Steele as Tucson Smith, Tom Tyler as Stony Brooke, and Rufe Davis as Lullaby Joslin. The scene is Texas right after the Civil War and former medical doctor Ken Morgan (James Bush) is leading a gang of "bushwackers" against the unfair taxation policies of the occupying Union army lead by Colonel Conway (Guy Usher). But Conway is unaware that his civilian attaché Bentley (Hugh Prosser) and nasty Captain Hawkes (Roy Barcroft) are in fact squeezing money from the populace in general and tavern owner Morgan (Budd Buster), Ken's father, in particular. When Ken's younger brother (Mickey Rentschler) is shot in the back by one of Hawkes' men, Tucson, Lullaby, and Stony come to the rescue, despite the fact that the latter fought with the Union Army in the recent war. Learning the truth from the Mesqueteers, an outraged Colonel Conway demands an investigation. Hawkes, however, has the colonel killed by his own orderly (Cactus Mack), who manages to frame Ken. When Stony and Tucson interfere, they are imprisoned by Bentley, who has taken over command. But by using a great deal of cunning, Lullaby and his sidekick Rastus (Cordell Hickman) get word to Major Briggs (Stanley Blystone) -- the inspector general -- and the renegade army officers are wiped out in a final shootout. Unusual for a B-Western, West of Cimarron got in trouble with the Production Code Administration, which demanded that some of the killings be eliminated and that the writers more clearly portray Hawkes and his men as renegades and not representatives of the Union army.

Critic Reviews for West of Cimarron

There are no critic reviews yet for West of Cimarron. Keep checking Rotten Tomatoes for updates!

Audience Reviews for West of Cimarron

There are no featured audience reviews for West of Cimarron at this time.