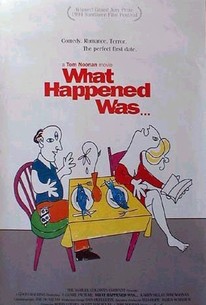 What Happened Was... Ratings & Reviews Explanation

What Happened Was... Photos

Two vaguely acquainted co-workers meet for a first date. This is the deceptively simple premise of What Happened Was..., the directorial debut of actor and playwright Tom Noonan. Noonan also portrays Michael, a paralegal; Karen Sillas plays Jackie, an executive assistant at the same New York law firm. The film limits itself to their first encounter outside the office, a dinner date at Jackie's apartment, and allows the evening to unfold at a natural, unforced pace. Michael and Jackie are humorously awkward at first, nervously focusing their conversations on the office; in these early sections, the film plays as a sly, humorous dissection of modern mating rituals. But as the evening continues, Michael and Jackie begin to open up. As they reveal more about themselves, it becomes clear that they both have secrets; though the conversation remains relatively mundane, something ominous is lurking beneath the surface. By the end of the evening, the film takes a turn towards serious drama, as Michael and Jackie reveal more about themselves than they ever intended.

Critic Reviews for What Happened Was...

Audience Reviews for What Happened Was...

What Happened Was... Quotes