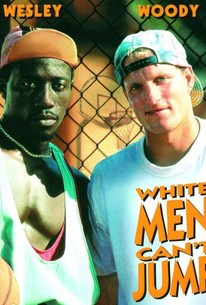 White Men Can't Jump provides a fresh take on the sports comedy genre, with a clever script and a charismatic trio of leads.

Ron Shelton (Bull Durham) wrote and directed the basketball-oriented seriocomedy White Men Can't Jump. Woody Harrelson plays Billy Hoyle, a white con artist who hustles basketball games with black players, lulling his victims into the misguided notion that white men can't match up with black hoopsters. One of his victims, African-American Sidney Deane (Wesley Snipes), becomes Hoyle's "agent," arranging his various inner city scams. Deane doesn't feel as though he's selling out his own people; he goes along with Hoyle to provide a better life for his wife, Rhonda (Tyra Ferrell), and son. The film breezes through several zany sequences, including one liberal-baiting satirical moment set at a black/white "solidarity" basketball game arranged by an ambitious politician. Crooked gamblers intrude upon the last scenes of the film, but Hoyle is rescued by his girlfriend, Gloria (Rosie Perez), a Jeopardy freak who realizes a lifelong dream by winning big on the Alex Trebek-hosted game show. ~ Hal Erickson, Rovi

Alex Trebek
as Himself

Dion B. Vines
as The Bank

Carl A. McGee
as Gambler