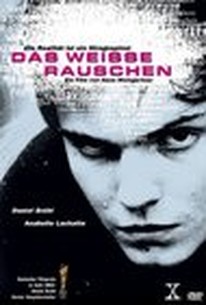 The White Sound begins as a young German, Lukas (Daniel Bruehl), takes a train from his family home in the country to his new home in Cologne where he plans to move in with his older sister, Kati (Anabelle Lachatte). Arriving at the train station, he finds that Kati isn't there, and wanders about in a nervous daze until she finds him. Later, at her flat, he's warmly greeted by Jochen (Patrick Joswig), Kati's hippie-ish boyfriend. Lukas goes out partying with them, and meets a girl (Katharina Schuttler), with whom he quickly makes a date. They plan to see Taxi Driver, but when they arrive at the theater, they find out that the film hasn't opened yet. His date takes it in stride, but Lukas freaks out, screaming obscenities at the hapless cashier in a paranoid frenzy. His date runs off, frightened. Lukas doesn't know it yet, but he's descending into schizophrenia. The film chronicles his breakdown as he begins hearing whispers that grow more and more threatening, eventually telling him that Kati and Jochen find him disgusting and plan to kill him. The only thing that seems to soothe his psyche is the "white noise" of the water running in the shower. One day, in a panic, he jumps from the window of his room, and at the hospital, he and Kati get the terrible diagnosis. Lukas begins taking medication, gets a mundane job, and seems to be functioning fairly well. But despite Kati's best efforts, he can't maintain his sedated new life. He stops taking his medicine and runs off. Director Hans Weingartner studied cognitive science before becoming a filmmaker. The White Sound is his debut feature. ~ Josh Ralske, Rovi

There are no featured audience reviews for Das Weiße Rauschen (The White Sound) at this time.