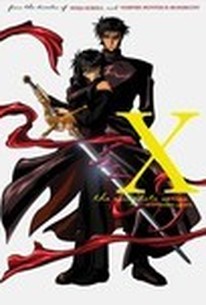 The story takes place in 1999, the Year of Destiny, and the beginning of the end of the world. The future of the universe rests on one young man, Kamui Shiro, who must destroy either the Dragons of Earth or the Dragons of Heaven - two opposing armies. He alone must decide whether humanity should be destroyed to create a purified universe, or whether it should be protected to preserve civilization. Two oracles, the sisters Hinoto and Kanoe foresee the coming of the Dragons and predict opposite outcomes. Each sister gathers strength and ammunition to insure her own vision for the future. However, neither sister realizes that there is one man who has an even greater power than the Dragons, and that ultimately he will determine the fate of the earth. Which sister will prevail and how does Kamui fit into their struggle? The answer to this question will forever affect humanity.

There are no critic reviews yet for X. Keep checking Rotten Tomatoes for updates!

There are no featured audience reviews for X at this time.