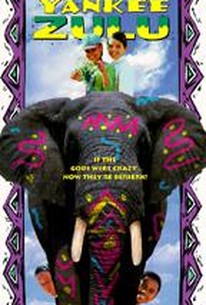 In this fast-paced comedy from South Africa, childhood friends -- one black, the other white -- are reunited after 25 years. Rhino and Zulu's friendship was torn apart by racism -- in part because of Rowena, Rhino's white-supremacist girlfriend. Zulu ran off to the United States, where he became a car thief. Now, Zulu has been deported back to his homeland because of his criminal record. And waiting for him back in South Africa is Diehard, a villainous bigot assigned to take Zulu to prison. But Zulu escapes, along with a winning lottery ticket, and finds Rhino, who helps his old friend flee from the authorities. The two wind up disguising themselves in order to get away -- Rhino pretending to be black and Zulu masquerading as a white man. And the role reversal leads to a string of sight gags. Helping the two reunited buddies elude the police are an AWOL prince and Tienke, Rhino's adopted daughter. But will this wacky band of friends be able to elude their pursuers -- AND keep their lottery winnings?

There are no critic reviews yet for Yankee Zulu. Keep checking Rotten Tomatoes for updates!

There are no featured audience reviews for Yankee Zulu at this time.