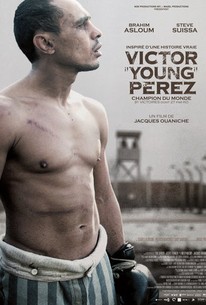 Boxer Victor Perez, a world flyweight champion, is taken to Auschwitz in 1943. In the 1930s, a young Victor Perez becomes a boxing star on the global platform and resides in Paris. Here he has a beautiful wife, who is a French actress. Soon the World War takes over and because Victor is Jewish, he is deported to Auschwitz, renowned concentration camp. Victor fights for the entertainment of the Nazis. Surprisingly out of the 140 bouts he encountered, he wins 139.

There are no critic reviews yet for Young Perez. Keep checking Rotten Tomatoes for updates!

There are no featured audience reviews for Young Perez at this time.