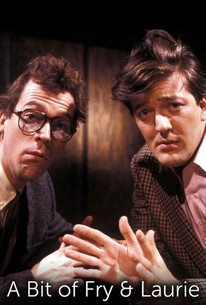 Episode 1.3
A Bit of Fry and Laurie Season 1

Stephen pilfers Hugh's brain as a joke, but the imperturbable Laurie doesn't seem to notice. Other sketches include a lunch date that's spoiled by one man's lack of confidence; and a suspicious doctor whose practice is a smoke screen for cigarette sales.