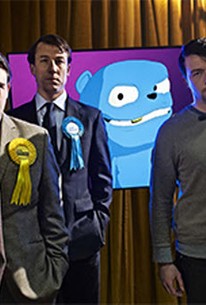 "The Waldo Moment" aims for sharp political commentary, but comes off as uninspired as the obnoxious cartoon that runs for office.

Meet Waldo. A CGI blue bear from a children's educational TV show who in reality is an anarchic character on a satirical late-night topical comedy show. Behind the scenes, Waldo is voiced and controlled by failed comedian Jamie Salter. When the channel decides they would like to give Waldo his own pilot, the production company enter him into a political race against one of his victims, Conservative Liam Monroe, for a stunt. Jamie isn't comfortable with politics - he just sees himself as a clown - but once the wheels start turning there's no stopping the thing. So what can Jamie do? 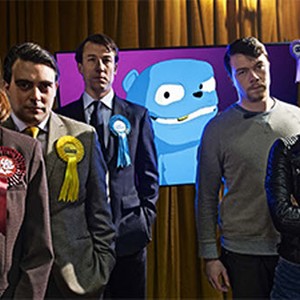 Critic Reviews for The Waldo Moment

It will be interesting and possibly terrifying to see how political discourse evolves as the Like generation not only comes of age, but becomes candidates.

The message that we may complain about our politicians but they're all we've got scored a bleak bulls-eye.

The closest Black Mirror has to an agreed-upon misfire, this political spoof doesn't quite connect as it follows the rise of a Triumph, the Insult Comic Dog-like figure.

The best Black Mirror episodes tiptoe along the tightrope between the plausible and the absurd, but "The Waldo Moment" loses its balance.

"The Waldo Moment" is among the most unnerving of Black Mirror's portrayals of a future that closely parallels the present.

Joyless and never quite as clever as it fancies itself to be, there's little about "The Waldo Moment" that makes a strong enough argument for its existence, despite the boost the outlandish political climate might have given it.

Observed in a bubble, it's a fine episode that checks all of the proper Black Mirror boxes...

It's unfocused and, like its title character, takes pot-shots at multiple targets without saying anything particularly meaningful itself.

The final episode, "The Waldo Moment," was fantastically funny, mean, and sad.

Black Mirror is a show that challenges us to reappraise our world, and "The Waldo Moment" urges us to be wary of giving our power away to people who say the things we want to hear.

The whole idea of this story is social media's relationship with politics. Its a good idea and one that Brooker writes with a sense of realism, but adding a touch of comedic satire too.

The third instalment of Black Mirror 2.0 is the least sci-fi of the lot. It's also the weakest of the series, a disappointing attempt at political satire that's neither funny nor perceptive enough to stick in the memory.