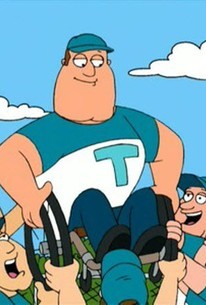 Stewie (voice of Seth MacFarlane) gets his first disturbing look at the Teletubbies. Things are going well at the toy factory for Peter (MacFarlane), who tells his boss about his idea for Facts of Life Transformers. But things take an ugly turn when Peter accidentally injures the boss' "ringer" during softball practice. Peter is told that he'll lose his job if he doesn't find a replacement. New neighbors move in next door; while Lois (voice of Alex Borstein) quickly befriends Bonnie (voice of Jennifer Tilly) and Joe (voice of Patrick Warburton), Peter is decidedly un-neighborly until he sees all of Joe's college baseball trophies. He quickly convinces Joe to play for the company team, not realizing that Joe is wheelchair-bound. It turns out, though, that Joe is still a great player. "Way to earn that parking space!" Peter tells him. Joe quickly becomes a focal point of the whole town, including the Griffin family, which makes Peter very jealous. Peter decides to steal Joe's thunder by becoming a hero himself. What better way to do that than by thwarting an armed bank robbery? This episode features the voice talents of Michelle Kwan.

A Hero Sits Next Door Photos 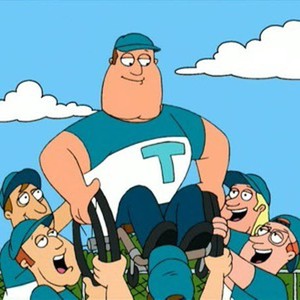