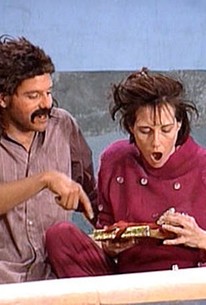 Life Is Precious and God and the Bible
Mr. Show With Bob and David Season 4

Bob Odenkirk and David Cross open the show, as usual, but this time, Bob notices that David is stoned. It's medical marijuana, David explains, showing Bob his prescription. "For stress related to working with Bob Odenkirk," Bob reads. Bob accompanies David to the pharmacy to get a refill, where they're forced to "hang out" in a back room and listen to a tape of the pharmacist's band. Later, guest star Michael McKean plays a bombastic law professor (modeled after John Houseman in The Paper Chase) who harangues his incoming students. When he's called away on a personal matter, he asks a student, Gerald (Bob), to take over the class. Quickly getting over his nervousness, Gerald tries to mimic the professor's bluster. "You come in here with heads full of soup," he rants, "When you are done with law school, your brain will be like a steel trap with the bloody foot of law inside it, crying out for its mommy." In another sketch, the growing phenomenon of Hitler cloning is addressed. As reparations for the Holocaust, the cloned Hitlers are being given to Jewish families as servants. At a bar where the Hitlers congregate, one complains about the dating scene ("Once they find out you're Hitler, forget about it"), while an older Hitler explains, "We have a saying around here, 'Get used to it, Hitler.'" Later, Bob plays a daytime talk show host stuck on a lifeboat with his bickering guests: a man, his girlfriend, and his girlfriend's mother, who is pregnant with his baby. There's also an audience member onboard. The show ends with David playing a consumer reporter on the local news, who investigates the legitimacy of "Wishing Well and Such," where the proprietor (Bob) promises customers that their wishes will come true.

Life Is Precious and God and the Bible Photos 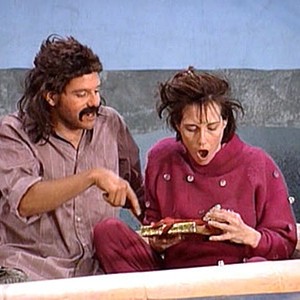