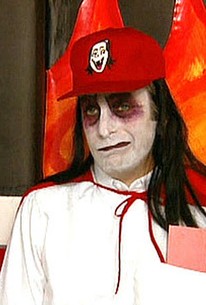 The last episode of the fourth and final season of HBO's Mr. Show begins on-stage with Bob Odenkirk and David Cross at the "Globo/Chem Corporate Retreat." "We have got a comedy show tonight that's gonna help you laugh your sales through the roof!" says Bob. Later, Josh Fenderman -- a white performer who dresses and dances just like Michael Jackson -- and his group, Honesty in Motion, take the stage. This segues into a documentary about Fenderman, a former child star who has fallen on hard times. Confronted with accusations that she exploited him, his mother (Jill Talley) explains, "For the first five or six years of his life, he made no money at all. We paid for everything." Fenderman ends up suing the U.S. Treasury, because, as he explains about his money, "It didn't come with instructions or a manual." He wins his case, prompting the Treasury Department to put warnings on all currency reading, "Warning: This Dollar Is Not Yours After You Spend It." In another sketch, Bob and Jill are a couple reuniting after a week-long break-up. Jill asks Bob what he did all week, and he responds, "Besides cry?" But over the course of their lunch date, she discovers he joined a Christian rock band, got engaged then left his bride at the altar, and starred in a porn film. This episode also features the renowned sketch in which David plays Marilyn Monster, a scary, Marilyn Manson-like depraved rock star, in a training video for his pizza restaurant chain's "fun-ployees." Monster says they hire "fun, rebellious extroverts who make their own rules." He then explains a long list of rules. He ends the training video by saying, "Oh, and don't forget to break some rules!" then adds, "But -- don't break any rules." 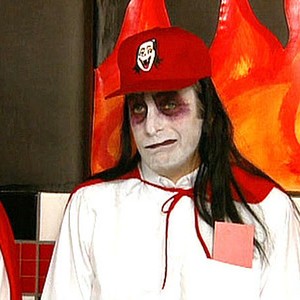