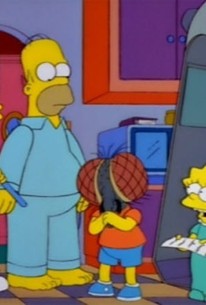 In the eighth installment in The Simpsons' annual Halloween cavalcade of ghoulish tales, "Fly vs. Fly" finds Homer Simpson (voice of Dan Castellaneta) buying a matter transportation gadget from Prof. Frink (voice of Hank Azaria) at a garage sale. While playing with the gizmo, Bart (voice of Nancy Cartwright) accidentally combines his atoms with those of a fly, turning him into a fly-headed monster while a bug with Bart's head struggles to reverse the process. In "The Homega Man," a war of words between Mayor Quimby (also voiced by Castellaneta) and France turns ugly and Springfield is attacked by a Gallic neutron bomb. Homer turns out to be the town's lone survivor, and he enjoys the solitude until the recently deceased rise as bloodthirsty zombies. And "Easy Bake Coven" takes us back to 1649, when Springfield was a village ruled by Puritans and many lived in fear of being accused of witchcraft. At one town meeting, Marge (voice of Julie Kavner) is charged with dabbling in the black arts, but she has a surprise for everyone -- she really is a witch, and with her sisters Patti and Selma (both also voiced by Kavner) plans of wrecking revenge of the townspeople. "Treehouse of Horror VIII" was first aired on October 26, 1997. 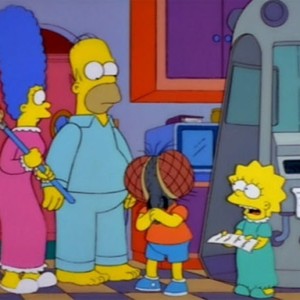