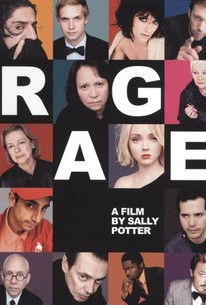 Director Sally Potter examines the effects of globalism in the information age in this drama following a young blogger named Michelangelo as he interviews a series of eccentric subjects over the course of seven days. In a prominent New York fashion house, flamboyant designer Merlin prepares to debut his latest collection as curious blogger Michelangelo shoots interviews on his cell phone. His subjects; a disparate mix of New York denizens including a celebrity supermodel named Minx, a financial backer named Tiny Diamonds, a seamstress named Anita de Los Angeles, a pizza delivery boy named Vijay, a war photographer named Frank, and a critic named Mona Carvell. The fashion industry is in crisis thanks to globalization and a faltering economy. As the ever-increasing gap between appearance and reality widens, Michelangelo becomes the person everyone turns to in order to vent their frustrations. Later, when a model dies on the runway and police launch a murder investigation, the interviews take the form of confessionals in the eyes of a child armed with the two most powerful tools of his generation: the Internet and a cell phone.